“We know and we have seen that conferences are events which bring together important people who are unable to act on their own, but who together are always able to resolve that in fact nothing can be done…  Why is [Europe] unable to forecast and prevent one crisis after another?…  Today the European spirit and its people believe in superficial and secondary things…  but what does renewal mean?  A rule of thumb is that the depth of renewal must be at least equal to the size of the problem…  The task, therefore, Dear Friends, is not to do a few things better – we must do more than that.”

Viktor Orbán, Prime Minister of Hungary, addressing his party’s congress, December 2015
The world is not short of problems, current or predicted.  One published list of converging catastrophes foresees a perfect storm brewing, reaching its zenith sometime around 2020 and built from the extrapolation of seven great trends that reinforce one another:

This month’s climate change conference in Paris was set up to tackle one important part of the last of these challenges, and only that, though its actual deliberations showed how inseparable they are all becoming.  That lack of joined-up thinking is the problem that may be the key to the rest. 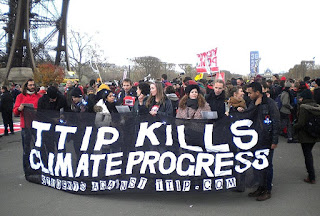 WR President Colin Bex was in Paris, on the fringes of the conference, flying the flag and meeting other representatives.  Colin’s request for official accreditation, as the leader of a UK political party, was ignored.  The implication is that alternative politics has nothing to offer the world, even though it’s alternatives to the failed status quo that are most urgently needed.  Developing the links made at events like the Paris conference is vital to advancing our own alternative.  Colin reports that the demonstrators he met were very positive in their outlook: “Not least on account of atrocities visited on Parisians recently, the demonstrators are motivated by feelings of peace, love and respect for and in solidarity with all in the city, especially those who continue to encounter grief and other suffering as a consequence, and accordingly they are committed to generating an exclusively peaceful and friendly experience.” 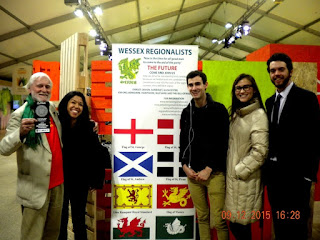 It will take much more than this however if the world is to turn away from catastrophe.  Yes, there is a deal, and yes, it says world leaders will try to limit global warming to 1.5°C.  But there are no means to actually achieve this.  The collective reductions promised by world powers only head us closer to 3°C.  And even those reductions are not legally binding.  Governance is surely key, especially the decentralisation of power so that those who make decisions are surrounded by the consequences and cannot run from them.  This is bad news for those who would like to make climate change the cause upon which a campaign for lawyer-led world government can be built.  But it need not be incompatible with combining wider moral responsibility (thinking globally) with the vision of a co-operative community (acting locally).  Or with the notion of a bridge between them (planning regionally). 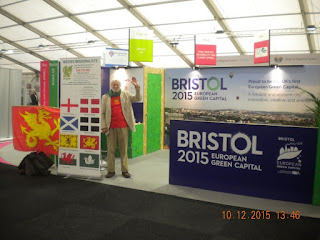 France has often been in the news this year, faced with terrorist attacks, a climate conference, and now elections for the country’s revised regions (their areas still largely botched by control freaks in Paris).  There has been much coverage of the fortunes of the far Right Front National in those elections but almost no mention of the result in the one Mediterranean region that nature prevents Paris from gerrymandering.  The island of Corsica – conquered by France in 1769 – has elected a regionalist government for the first time.  To much alarm in Paris, which has responded to demands for political and cultural concessions with the usual huffing and puffing about France’s immutable constitution.  The new President of Corsica’s Executive Council, Gilles Simeoni put things into a better perspective: “We want dialogue with Paris and political solutions but it is also an undisputed fact that we belong to the Corsican nation and Corsican is our language.”

In Spain, pro-independence and pro-sovereignty parties made some intriguing advances in yesterday’s elections, which also produced very bad results for the established Madrid parties.  In Corsica and Catalonia, as in Scotland, Europe is leading the way to a decentralised politics that also recognises the challenges of inter-dependence.  What is failing these places, what is failing Europe, and what is failing the world, is a system of old imperial states unable to manage the transition to a radically different kind of future.