WR President Colin Bex and Secretary-General David Robins were in Cornwall on Saturday, sitting in on the Annual Conference of Mebyon Kernow.  The venue was what used to be New County Hall, Truro and is now Lys Kernow (‘the Court of Cornwall’).  The building’s directional signage is all bilingual, in English and an expanding language still widely imagined by the imperial media to be as dead as the dodo.  (And there were even genuinely Cornish pasties for lunch.)

MK, now with four councillors on Cornwall Council, is entitled as a party group to borrow the Council Chamber for meetings.  With Cllr Dr Loveday Jenkin in the chair, and the semicircle opposite filled with rows of Cornish nationalists, the sight provided a real sense of déjà vu, more like sitting in on a session of the future legislative Cornish Assembly.  (The empty seats in the photo are those which in a Council meeting would be occupied by Cabinet members and chief officers.) 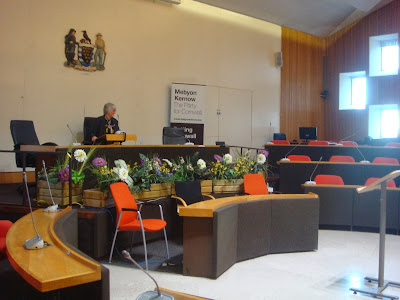 The conference decided party policy on a number of matters.  A carefully balanced, scientifically grounded position on badgers and bovine TB was agreed, opposing culling while also being supportive of the farming community as the search continues for a workable vaccine.  The point was made that shot badgers are not being tested to see if they really do have TB (only to confirm that they were humanely killed), also that since TB can be carried by other mammals, such as deer, the culling route ultimately implies eradicating most of our larger wildlife.  The London regime’s policy came across as doing something for the sake of being seen to be doing something, whether it works or not.  And better not to ask questions in case it spoils their script.

Transport is another area where MK’s policy is researched with an impressive thoroughness.  The conference called for a statutory Quality Bus/Rail Partnership under the 2008 Local Transport Act, using a council-owned ‘arms-length’ bus company to return Cornwall’s public transport to local control.  These powers are equally available to Wessex local authorities.  Why are they so timid in using them?  Why do so many assume that FirstGroup, Stagecoach and the like can just get away with whatever they please?
Two themes dominated the proceedings.  One was the failure of the London parties to build a fair society, all of them viewing austerity coupled with tax avoidance as the new normal.  Why, asked MK Leader Cllr Dick Cole, do Conservative and LibDem councillors, ordered to make cuts in local spending, out of all proportion to the cuts being made to central government’s vanity projects, not send the necessary signal to Westminster by resigning from their parties?  Are their political loyalties more important than their duty to the electorate?
The other dominant theme was the accelerating destruction of environmental and cultural heritage through housebuilding, driven by dodgy data that supposedly informs us that there is no alternative.  All three main London parties are part of the scam, which in a Cornish context is exposed in a well-researched polemic, The land’s end?  The great sale of Cornwall by Dr Bernard Deacon.  The author told conference that massive suburbanisation is now destroying the essence of a distinctive Cornwall.
The Cornish are calmly but firmly angry, and they have every right to be so.  So are many in Wessex.  We heard that some of the research now being quoted in Cornwall comes from rural Wiltshire.  The difference is that the Cornish are doing something about it.  There is apparently more grit and determination in the little finger that is Cornwall than in the whole of England.
What is the English response to the great social and environmental crisis of our time?  It is to place a childlike faith in centralism to make things better.  It is to join well-meaning organisations like the CPRE and be always at pains to be moderate and reasonable in writing to Ministers of the Crown.  Why?  Psychopaths don’t respond to reason and moderation.  And what will happen in 2015?  The English electorate will vote one or other of the psychopath parties into power for another five years of legalised tyranny.
Celtic nationalists live under oppression.  They know the enemy well.  The English, in contrast, are not one folk but two part-folks.  There is the arrogant Englishness of the ruling elite, Norman to the core, especially the Labour bits of it (since if you ape your masters’ subtleties, the result will always come out as a clumsy parody).  And then there is the deferential Englishness of those ruled, the ones who won’t question the orders from London because, well, it’s ‘our’ government, isn’t it, so they must know best, right?
Wrong.  Wessex Regionalists are part of a truly revolutionary movement, one that wishes to see the world turned not upside down but the right way up, with sovereignty to the parishes in an England that governs itself on a human scale.  One thing the Celtic countries have to their advantage is a manageable territory that can be understood and loved.  England is a land of 32 million acres, with a population of 57 million.  To drive from one end to the other takes a whole exhausting day.  A human-scale England has to be a regionalised England.  Otherwise it will remain what it has been since 1066, one fully comprehensible and directable only from above by its haughty rulers.
To get to a human-scale England will take much action by many individuals.  There will be those who occupy green fields designated for destruction by democracy-overturning Planning Inspectors, and who suffer the blows of the police and private thugs sent there to uphold developers’ ‘property rights’.  There will be those who scale the offices of hated agencies and corporations to unfurl the Wyvern flag of freedom.  There will be those who stand in elections to oust the Tory, LibDibDib and ‘Labour’ representatives complicit in the destruction of one of the most beautiful and historic lands on the planet, a part of the common treasury of all humanity, born or yet to be born.
Or maybe there will be none of this.  Maybe we will just stand back and spend our time sneering at Celtic neighbours who have got life right.  Maybe we will just go quietly into the twilight.  Being English.  Not wanting to make a fuss lest we appear impolite.