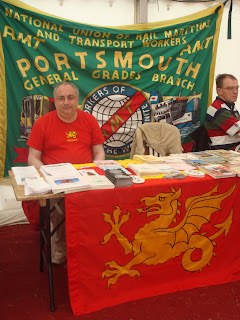 Our stall at the Tolpuddle Martyrs’ Festival is becoming a well-recognised feature. Yesterday, we found a place in the marquee beneath the Portsmouth RMT banner (left, with Nick Xylas), which caused a little confusion until eventually its owners came to take it out for the traditional parade through the village.

The RMT’s Wessex Region banner bears a splendid gold wyvern. Sadly, we weren’t able to catch a glimpse of it on this occasion, although we were assured that it was around somewhere.

The only rail-related items on the stall were some membership forms for the New Somerset & Dorset Railway that we were hosting as a favour, and which were also among the most popular material. New S&D have certainly struck a chord with folk in rural Dorset now inching towards the points-change that will take them from ‘Re-opening – 0% probability’ to ‘Re-opening – 100% probability’. In how many years?

Some of our visitors were far-sighted enough to recognise that Wessex Regionalism will make the same transition, being poised today for the kind of take-off that Celtic nationalism achieved in the 60s. The importance of repeat attendance became clear from conversations with those who’d seen us at Tolpuddle before but this time were willing to take a leaflet, buy a car sticker and ponder whether we haven’t been right all along. It can be a wearisome day refuting ignorance and cynicism but that’s the kind of breakthrough that makes it all worthwhile.

Most of the stalls in the marquee had a ‘green’ rather than ‘red’ emphasis this year – a sign of times to come – with land rights prominently represented. Of course, there’s still one or two sad old bolshies to shuffle along and tell us that a One World Dictatorship is the answer and that devolution is divisive. It isn’t. We work with, not against, those in other areas who also want to take back power to make our own decisions, in our own communities, and not have them over-ruled by folk who think they know better because they live in the right London suburb and can pull the right strings.

If there was any theme, it had to be Maggie. Folk singers in the marquee wailed on about the miners’ strike and at least two different versions of a T-shirt circulated with the words ‘I Still Hate Thatcher’. After 21 years, 13 of them under New Labour, the insincerity is insensitive. How many of the wearers voted for Blair or Brown, and will vote with equal enthusiasm for any other red-rosette-wearing, warmongering control-freak who claims the corpse of radicalism from the morgue of British politics?

Thatcher won because she had a vision, one based on a denial of the common good, but she also won because Labour’s deluded insurrectionists drove millions of voters in her direction. That Labour has adopted Thatcherism as its creed is a kind of karma. Why? Because Labour helped to create it by its inability to articulate an alternative both attractive and achievable. Today there is only one party in Wessex still true to its radical roots. One whose voice will be heard increasingly loudly as the generations whom Thatcher and her Labour co-workers dispossessed take back our inheritance.